A male Hen Harrier elegantly flying, like a grey ghost, back and forth above a misty moorland is a sight that, once seen, is never forgotten. They are a hunter of the open uplands, keeping as far away from people as possible.

The Hen Harrier is a slender bird of prey, smaller than a Buzzard. The male is a ghostly blue-grey with long black, fingered wing tips, a long tail, a white rump (like a House Martin), and white underparts. Females are larger and dark brown. They have an owl-like appearance on their face. Their flight is buoyant and low, just one or two metres above the ground, as they quarter (zigzag) the ground for something to eat, holding their wings in a shallow V. 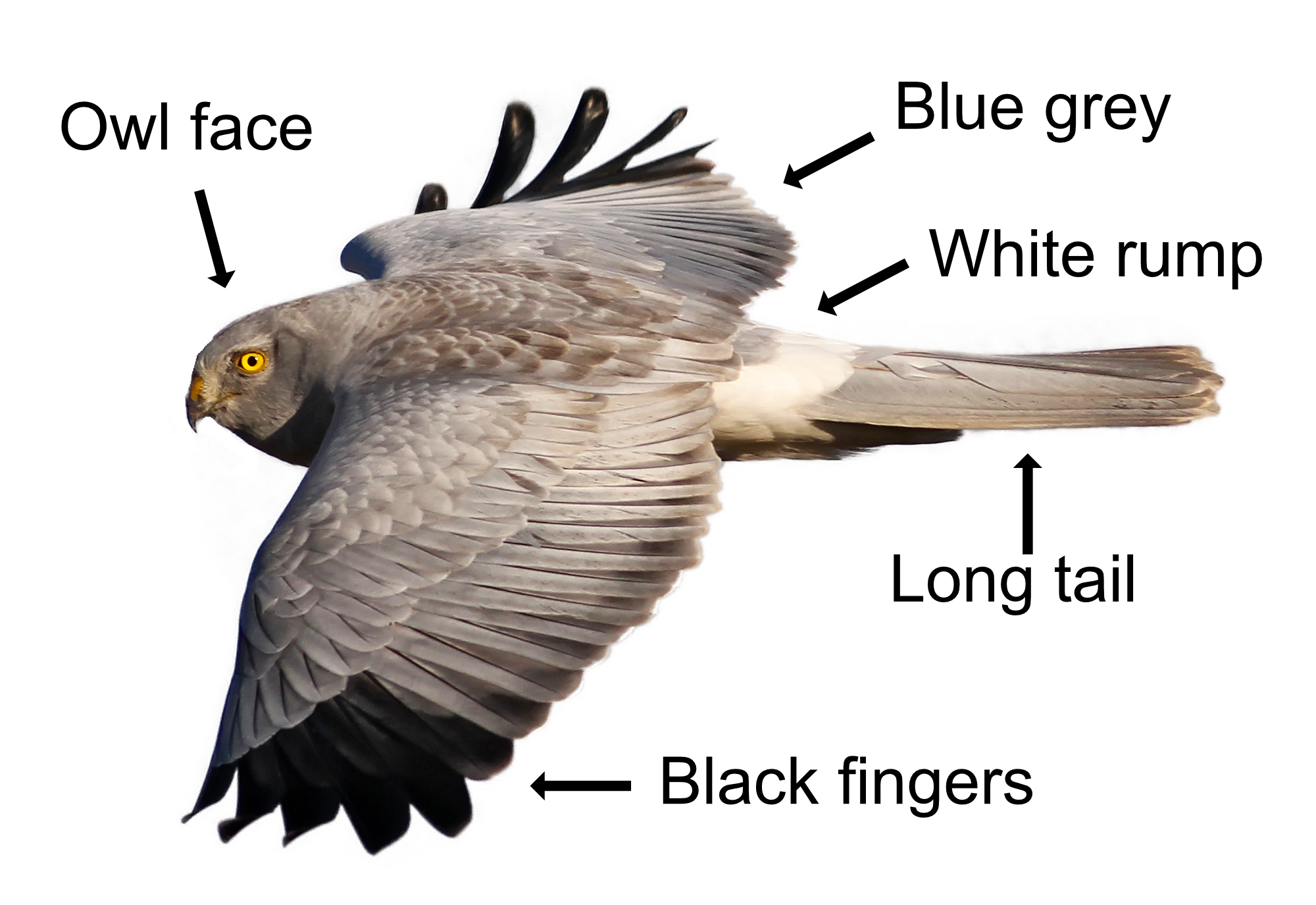 Hen Harriers use their ears as well as their eyes to find prey amongst the dense moorland vegetation. They eat small mammals and birds, making them the enemy of gamekeepers - who sometimes illegally kill them for eating their grouse and partridge chicks.

When courting, the male performs a spectacular sky dance, passing food to the female in the air or dropping it for her to catch. A male has a territory of more than a square kilometre and might have multiple partners. Where a male has mated with several females, all the nests tend to be close to one another as he is a bit lazy and doesn't want to go too far when delivering food to his ladies. Nesting begins in April and the nest is made of a pile of heather on the ground. The 4-6 eggs hatch after 30 days and are incubated by the female while the male brings things to eat. The eggs are laid one or two days apart so there is a noticeable age gap between the young. After two weeks the youngsters are big enough to be left on their own, and both parents hunt for food. They are able to fly 35 days later but stay with mum for several weeks to learn all about quartering. Hen Harriers are silent apart from when approaching a nest when they make a yikkering call.

There are 600 pairs of Hen Harriers in Britain and they are specially protected. Their number plummeted as a result of persecution in Victorian times and they were almost completely exterminated. They still face large threats from illegal persecution by gamekeepers and egg collectors. Planting of conifer forests on moorlands has also restricted the available habitat that they need. The Hen Harrier is partially migrant as northern birds move south and all birds leave their moorland breeding areas for lowland or coastal areas in winter where they may be joined by others from the continent. Large groups of Hen Harriers can gather in a single roost.

Their Latin name is 'circus cyaneus' where 'circus' is derived from Ancient Greek 'kirkos' for 'circle' which refers to a Hen Harrier's circling flight (and also where we get circus from as circus rings are traditionally round). The 'cyaneus' is Latin for 'dark-blue'. The English name Hen Harrier comes from the fact that they once used to hunt free-range hens! Female Hen Harriers are also known as 'ringtails' because of their distinctive tail banding.

The White-tailed Eagle is huge! It is an eagle of the sea. It is the largest eagle in Europe and the fourth largest eagle in the world, resembling a flying barn door with a big beak. Being so big, it is a bit of a playground bully, pinching food from other birds and throwing its weight about.

The White-tailed Eagle is brown with a long-looking pale head, a white tail, and a big, mean, hooked yellow bill (that is clearly visible even in flight). The wings are broad with obvious fingered tips. It has a short wedge-shaped tail, and the head protrudes when flying. Their flight is like a Heron's with shallow wing beats followed by a long glide. It soars with its wings held flat, which differs from the Buzzard's V-shape, though its barn door size is difficult to miss. 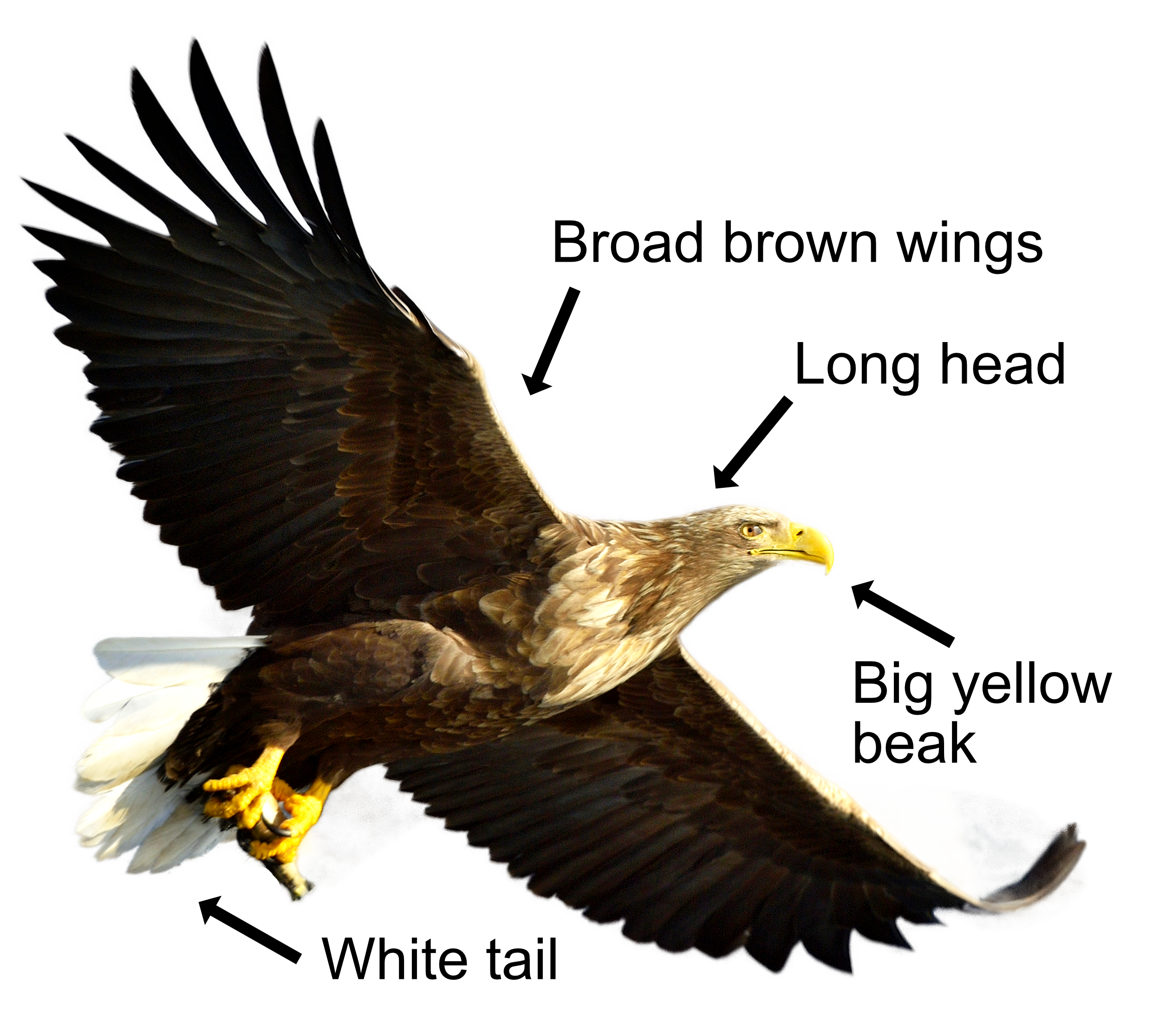 They can spend 90% of the time perched or standing on the ground looking mean, especially if the weather is poor. The males are slightly smaller than the females. They moult slowly and continuously throughout the year so they can always fly or pick on people they don't like. Their call is a dog like yapping "kew, kew, kew" with most calls being made during courtship or near their nest.

White-tailed Eagles are carrion feeders and opportunistic hunters, stealing food from other birds and even mugging otters! They will hunt singly or in pairs and, being such enormous birds, they like big prey. They normally eat fish like cod, herring or trout, but will also eat birds like ducks and gulls, and medium-sized mammals. When fishing, they fly low over the water, stop to hover for a moment, then drop to snatch a fish from the surface.

White-tailed Eagles pair for life and perform a stunning sky dance when courting where they touch talons. They build their nest in a large tree or on a cliff edge, making it from large sticks and driftwood, then lining it with grass and seaweed. A nest can be reused for many years and gets huge with the yearly added material. Two eggs are laid in April which are incubated by mum and hatch 38 days later. Both parents care for the young who can fly after 70 days. They are fed for a further month until they are ready to leave home. The young eagles will roam widely to find a place of their own.

The White-tailed Eagle suffered a massive decline because of persecution in Victorian times and nesting failures caused by various chemical pesticides and organic compounds. It is now specially protected and has been reintroduced in Scotland, where there is now a small population of 150 pairs that is growing slowly. Some threats still remain, notably illegal persecution by gamekeepers, the activities of egg thieves and fatal damage to birds from wind turbines.

Their Latin name is 'haliaeetus albicilla' where 'haliaeetus' means 'sea-eagle', from the Ancient Greek 'hali' for 'sea' and 'aetos' for 'eagle'. The 'albicilla' part means 'white-tailed' from the Latin 'albi' for 'white' and 'cilla' for 'tail'.