The Skylark has inspired so many poets and so many verses because the song is truly exceptional and because nobody but a dullard could miss it cascading down from the sky on a hot sunny day. The Skylark is the master of circular breath control, flying and singing for minutes at a time without a pause.

About the size of a Starling, the Skylark has a brown-streaked back, pale underparts, a streaked breast and a short crest that can be up or down - so don't rely on it to identify them. They have broad wings with a noticeable pale back edge, and white outer tail feathers. The wings can look almost triangular in flight. They blend in with the ground and can be very difficult to see until they suddenly fly off - from just a few feet away. 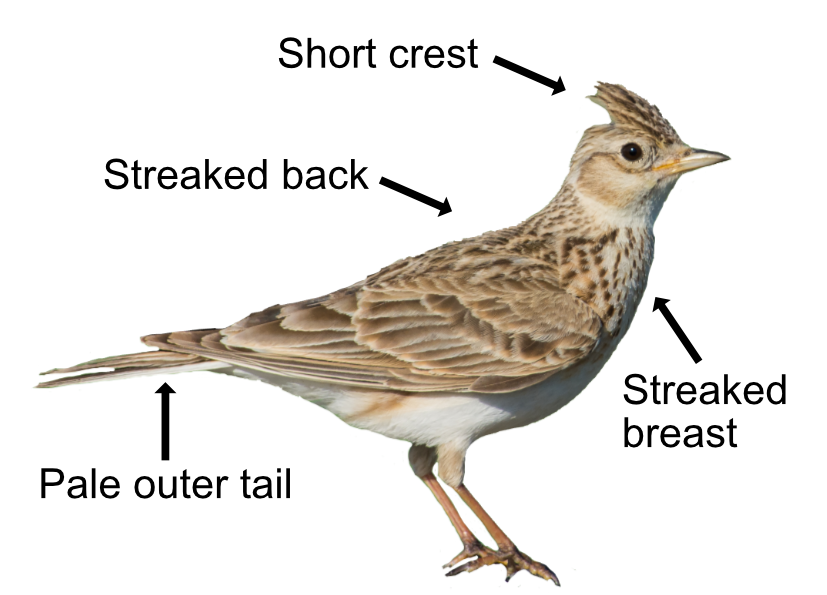 Non-stop singing while flying is what this bird is all about. It is to show how fit and healthy they are to the girls. They can sing for 10-15 minutes while rising vertically higher and higher in the sky until they become the merest dot. It is an unbroken, burbling doodle of notes with frequent quick repetitions and fast trills, laced with a bit of mimicry just to show off. They fall rapidly back to the ground once done. They love singing in the sun, even when it is windy, which is why we think of them as the sound of summer.

When not showing off, the Skylark spends most of the time walking about on the ground in wide open spaces, away from hedges and trees, so his adoring fans can easily find him to get an autograph. Out of the singing season, the Skylark's call is a "chirrup" and can easily be confused with that of a Sparrow, particularly as they all look brown at a distance. There may be more Skylarks around than you think.

Skylarks eat insects, seeds and some green leaves like nettles and docks (for vocal strength like Popeye’s spinach), by foraging on the ground.

They nest on the ground too, in small depressions lined with grass. The female Skylark sits on the 3-5 eggs, which hatch after 11 days. The young leave the nest 8 days later, learning to walk before they can sing and being schooled and fed by mum and dad. They finally fly at 15 days and depend on their parents for another week. With such a fast turn round of potential Pavarotti's, Skylarks can have up to 3 broods in a year.

In autumn, northern Skylarks come south and west to feed on arable fields and can form large flocks called an 'exultation' (which is a perfect way to describe them!) The Skylark is a common resident with about 1.5 million pairs and is one of the most widespread breeding birds in Britain. They can be found in all types of open areas including farmland, salt marshes, dunes, rough ground, and even urban spaces. They are only missing from the tops of high mountains as there is no one around there to hear them. There used to be even more Skylarks, but changes in farming practices have affected breeding success and halved the numbers in the last 20 years. In the distant past, they were trapped for food and their larks’ tongues were considered a delicacy (how horrid).

The Skylark's Latin name is 'alauda arvensis' where 'alauda' means lark and 'arvensis' means of the field. So, confusingly, a field lark. Science can be weird.