The Meadow Pipit is tricky to see on the ground as their camouflage blends in so well. They are more often seen in the sky when doing their parachute display flight. Unlike their cousins the Tree Pipit, Meadow Pipits don't need trees from which to sing, preferring showy off display flights instead, while giving their accelerating, repetitive "seep seep" song. They are heard mainly from March to July, falling silent until September when doing their moult, as they lose the flight feathers first and can't show off so well on the ground (and don't want to draw attention to where they are anyway). 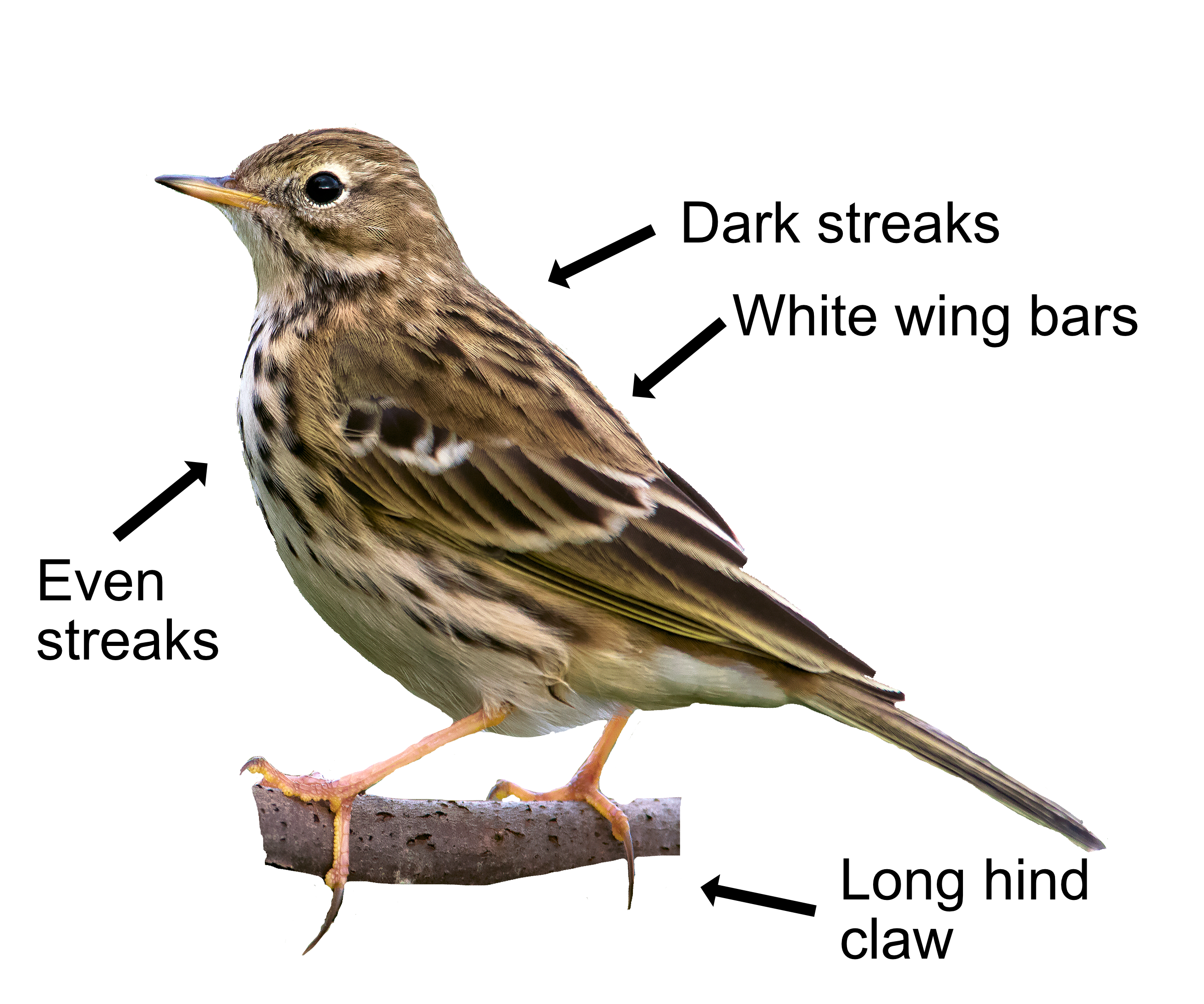 They are similar in size to a House Sparrow and are brown with darker streaks on their back. They have uniform sized streaks on their pale breasts and flanks. The tail is short with white outer feathers that show in flight, together with white wing bars. They have a thin pointed bill and a noticeably long hind claw. This is one of the best ways to tell them apart from other small brown, streaky birds - if you can see it. The Tree Pipit is very similar to the Meadow Pipit, but looks ‘cleaner’ with more distinct markings, paler pink legs and short hind claw.

The Meadow Pipit feeds mainly on insects, though will have the odd seed. It loves to munch daddy-long-legs, beetles, moths and spiders. It feeds on the ground, moving along in jerky motions.

Meadow Pipits nest in meadowland, upland moors, lowland marshes and other open country. The female builds a nest on the ground in April and lays 3-5 eggs which hatch after 13 days. Mum mostly incubates the eggs though both parents feed the young. The youngsters can fly 12 days later but leave the nest before then to hide in the undergrowth for safety as Merlins and Hen Harriers love a good Meadow Pipit snack. There are usually two broods. The poor Meadow Pipit is also often duped into being the 'foster parent' of a young Cuckoo. The adult Cuckoo will lay a single egg in a Meadow Pipit's nest. After hatching, the Cuckoo chick will push the other eggs or young birds out of the nest, so its foster parents concentrate on feeding their new, single, oversized chick.

There are 2 million Meadow Pipit territories in Britain. They are not as common as they used to be, mainly because of changes in land use and the loss of field margins. Set-aside (uncultivated land in which various wildlife habitats can develop over several years), wider field margins and traditional hedgerow management can all help to halt and reverse their decline. In autumn, more northern moorland Meadow Pipits will move down to the lowlands and the milder south.

Their Latin name is 'anthus pratensis' where 'anthus' is the Latin name for a small bird of grasslands and 'pratensis' means 'of a meadow', from 'pratum' for 'meadow'. The English name 'Pipit' is an onomatopoeic (sounds like) of their call.

The trouble with woodland birds is that most are tiny. The Tree Pipit being a good example. A classic little brown job. Despite his tiny size, his enthusiastic and exuberant song soon gets your attention. A cousin of the Meadow Pipit, who lives in the countryside, the Tree Pipit struts his stuff at the woodland edge and in wooded glades. He uses trees for his song flight, spiralling up and then parachuting down with wings raised and tail spread down to land back on a branch. Unlike his meadow cousin, he overwinters on the African savanna and only visits here between April and September.

Tree Pipits are very similar to Meadow Pipits but can be distinguished by their heavier bill, shorter hind claw and finer streaking on their flanks. They have a streaked olive brown back, a yellowy breast with heavy spotting, noticeably fine 'pencil' streaks on their sides, a white belly, and flesh-coloured legs. Their tail is longish and there is a pale stripe over the eye. The Tree Pipit's song is a series of trills ending with "seea-seea-seea" like they are really having fun. Their normal call is a harsh "teez". One way to remember the call of a Tree Pipit is to imagine it is buzzing its name "treeeeee".

Tree Pipits eat mainly insects like beetles, weevils, ants, and spiders. They will eat the occasional berry or seed in autumn. They generally feed on the ground. If disturbed, they will take off steeply and circle round until it is safe to land again.

They breed on heaths and grasslands or newly felled forestry areas. The female makes a nest in a depression on the ground amongst low cover. She lays 2-6 eggs and incubates them on her own until they hatch 12 days later. Both parents feed the chicks for 12 days, who will leave the nest even before they are able to fly. There are occasionally two broods, usually when the first has failed. The parents do their moult between June and September once they have finished raising a family and are getting ready to go back to Africa.

The Tree Pipit is a scarce summer migrant with 90,000 pairs found mainly in Central and Southern England and in Scotland. Numbers are falling in England though increasing in Scotland. The decline is unclear but may be because of increased grazing in woods and on heaths.

Their Latin name is 'anthus trivialis' where 'anthus' is the name for a small bird of the grasslands and 'trivialis' means 'common' from 'trivium' for 'public street'. It is from where we get the word 'trivial'. The Tree Pipit is certainly not trivial and, sadly, not all that common either.