The Golden Eagle is mainly found in the remote Scottish mountains. Gamekeepers and egg collectors almost persecuted it to extinction, but it is now specially protected and numbers are slowly increasing. In their natural environment, Golden Eagles are fairly long-living, often reaching the ripe old age of thirty-two.

The Golden Eagle is much larger than a Buzzard, in fact it is nearly twice the size. They are a uniform dark brown with a yellow brown head and looking all dark from below (unlike a Buzzard). They have a wingspan of over two metres and their tail and head protrudes prominently when flying. Their flight is slow and laboured with deep wingbeats, though the Golden Eagle mostly soars and glides, holding their wings in a shallow ‘V’ where their fingered wing tips are obvious to see. They have massive yellow feet, perfect for catching medium-sized animals. The female is bigger than the male and the youngsters differ from their parents by having white patches on their wings and tail. It takes a young Golden Eagle seven years to reach its full adult plumage. For a bird that is so big, they make very little noise, using their excellent eyesight to find a mate instead of calling for one. The only sound they ever make is a rare yelping “kyek” call. 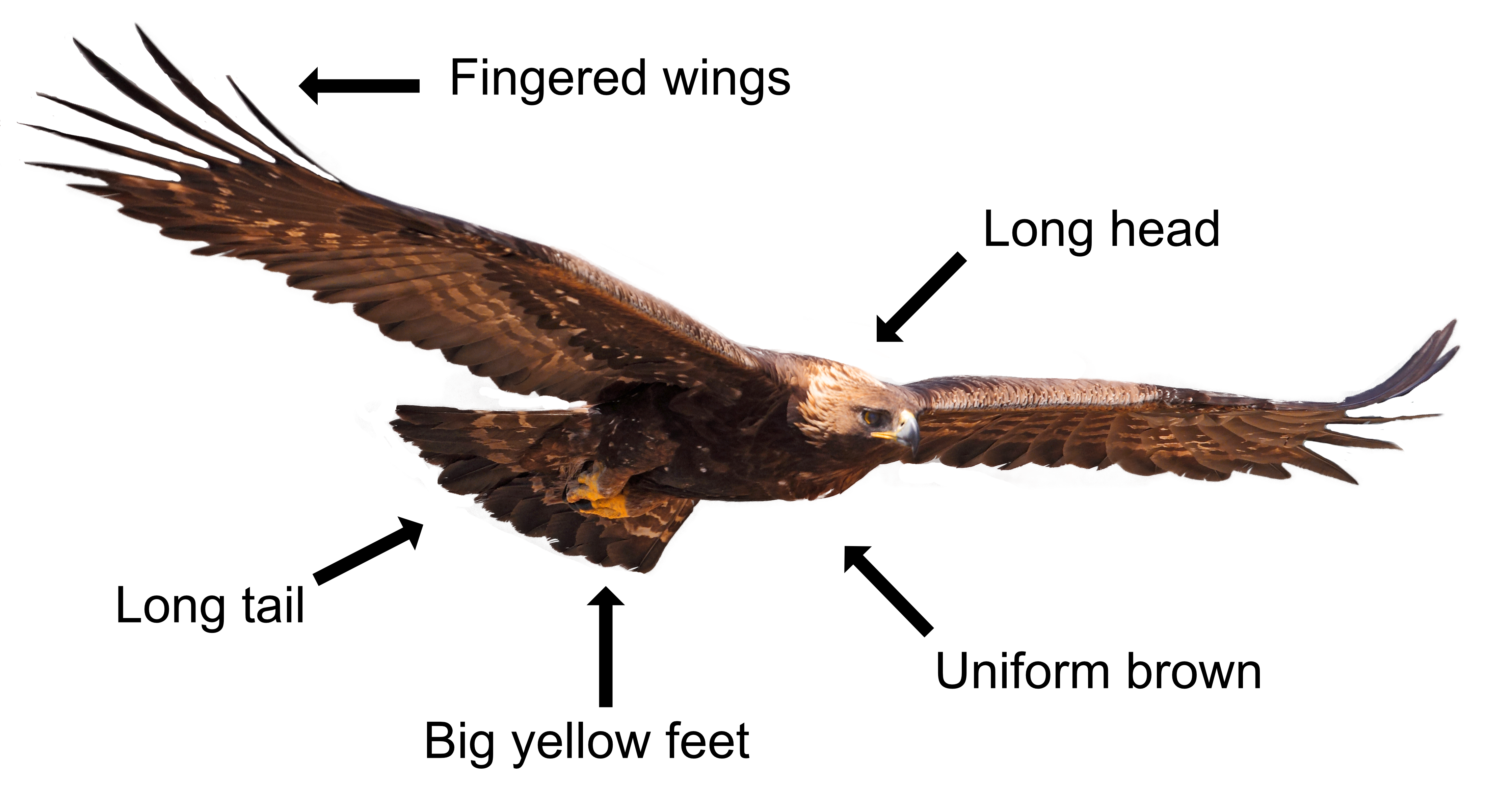 Golden Eagles hunt during daylight hours. They often go for days without food then have a huge feast. They eat mammals (like mountain hares, rabbits, squirrels, and young foxes), birds (like grouse, crows, and gulls) and carrion. Golden Eagles maintain some of the largest known territories of any bird species, which can be as big as 200 square km!

They are monogamous and remain together for life. The courtship includes undulating display flights by both birds. The male picks up a piece of rock or a small stick and drops it, then enters into a steep dive to catch it in mid-air, repeating this three or more times. In response, the female takes a clump of earth, drops it and catches it in the same fashion. So, she gets a nice rock, and he gets dirt. Pretty normal relationship then.

An Eagle’s nest, called an ‘eyrie’, is an extensive structure of branches, usually built on a cliff ledge. Two eggs are laid some days apart in March and mum does most of the incubation. Each egg hatches after 43 days. If there is not enough food available, the elder chick will kill the younger one, so it is common for only one chick to be raised. It pays to be nice to your older brother or sister. Both mum and dad feed what chicks there are. The youngsters can fly after 65 days. The parents will carry on feeding them for a further 3 months until, by autumn, they are fully independent. The young Golden Eagles wander widely until they establish a territory for themselves. This can take up to four or five years.

The Golden Eagle is mainly resident with only the young wandering from the breeding site. There are 440 pairs distributed in the wilder parts of Scotland. Their Latin name is ’aquila chrysaetos’ where ’aquila’ is Latin for ‘eagle’ and ’chrysaetos’ is Ancient Greek for ‘golden eagle’ from ’khrusos’, ‘gold’ and ’aetos’, ‘eagle’. Double eagle in case you forgot how big they are.