In medieval times, the Barnacle Goose was confused with the Brent Goose, which was silly because they look completely different. They also thought they hatched from barnacles, hence the name, which was even sillier. Like the Brent Goose, the Barnacle Goose migrates from the artic areas of Greenland to overwinter on our coastal lowlands, arriving here in October and leaving in March. 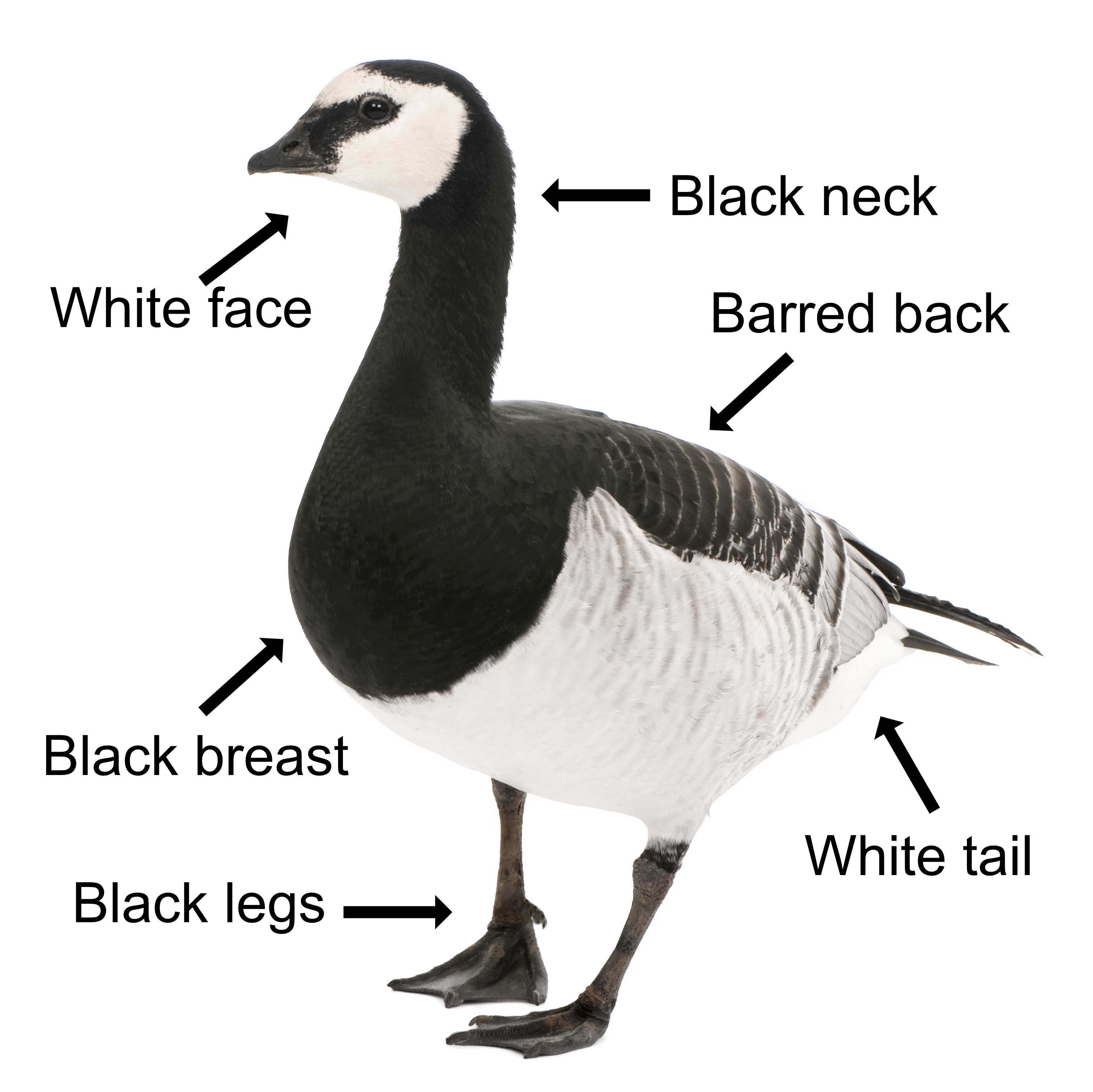 The Barnacle Goose is a medium-sized goose, smaller than a Canada Goose. It has a black neck and breast, a creamy white face, and barred back. The underparts are pale with black legs and a white tail. It is thought the white tail helps them keep together when flying in their noisy family V-formations. When flying, they look black and white with pointed wings. Their call is a single high-pitched bark, "rak!", that sounds like a yapping dog.

Barnacle Geese eat grass and other vegetation. They will use their bill to pull up roots which doesn't make them a favourite of farmers when they uproot the autumn sown crops.

Barnacle Geese pair for life and breed in the Arctic. They nest on inaccessible cliff faces near the sea to be safe from Arctic Foxes. Once hatched, the parents show the young goslings the way to jump down from the cliff and the goslings follow them by instinct and take the plunge. Their small size, feathery down, and very light weight helps to protect them from any serious injury. The parents then lead them to places where they can find food. The goslings are not out of danger, as the Arctic Foxes can stalk the young as they are being led to the wetland feeding areas. Sadly, only 50% of the chicks survive their first month. The ones that do survive, stay with their parents for their first winter.

About 90,000 Barnacle Geese overwinter here, mainly in Scotland and their numbers have increased over the last 50 years. Like other geese, they are specially protected.

Their Latin name is 'branta leucopsis' where 'branta' is from Old Norse 'brandgas' for 'burnt (black) goose' because they are black and 'leucopsis' is from Ancient Greek 'leukos' for 'white' and 'opsis' for 'faced'. A black goose with a white face is spot on. Like Brent Geese, because medieval people thought they hatched from barnacles, they were counted as fish and could be eaten on a Friday.