The Kestrel is best known for its hovering, like a harrier jump jet, above motorway verges and railway embankments. It is a pigeon sized falcon with a short neck, long wings, and long tail. The male Kestrel has a grey head, spotted chestnut back, grey tail with a black band, and buff underparts with dark spots. The wings are held straight in flight with a contrasting light inner wing and dark outer wing, giving them a black tipped look. The female Kestrel is slightly larger, has a more barred back, more streaked breast, and a brown head. You mainly hear Kestrels when they are being mobbed, issuing a yikkering "ke ke ke" call. 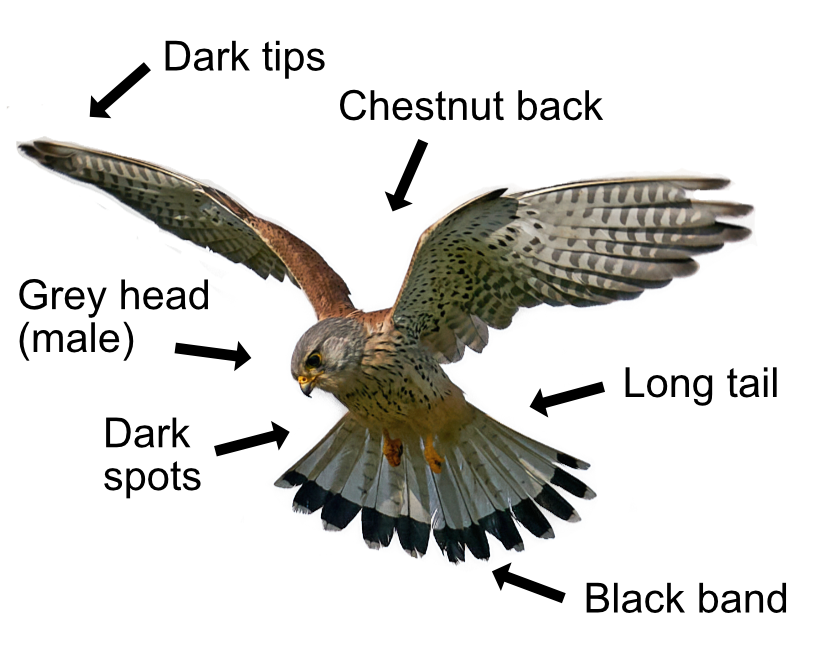 The Kestrel hunts for food in daylight and at dusk, hovering with its tail fanned and wings flapping or holding position effortlessly in a head wind. They drop from the sky or perch to feed on shrews, mice, moles, baby rabbits, chicks of ground-nesting birds and especially voles (particularly the yummy short-tailed ones). They will also eat large insects. When a tasty morsel is sighted, the Kestrel glides gently down and at the last-minute lifts its wings above its back to pounce on to its prey. The Kestrel can see near ultraviolet light, allowing it to detect the urine trails around rodent burrows (as they shine in the ultraviolet part of sunlight) like a pee seeking missile. The average Kestrel needs to eat 4-8 voles a day.

Kestrels nest in barns, holes in trees or the disused nests of larger birds. It does not build a nest of its own as such. When the 4-6 eggs are laid, both parents will sit on the eggs which hatch after 30 days. Mum looks after the kids for the first 14 days, letting dad know all about it by issuing a very quarrelsome "wik wik wik wik" call. Once the youngsters get a little bigger, they are fed by both parents. They fly after 30 days but rely on mum and dad for a further month while learning to hunt and hover. The youngsters need to eat 3-4 voles each per day to, so feeding a family of 6 is a lot of voles (24)! On average, only 2-3 chicks usually survive.

The Kestrel is a widespread, sedentary resident with about 50,000 pairs in Britain. It is scarce in mountain and urban areas. Sadly, like so many birds of prey, the Kestrel is in decline. Modern farming leaves less land to support the voles and small mammals they eat. The name Kestrel comes from the French 'crecelle' meaning 'rattle' - a reference to its yikkering call. The Latin name is 'falco tinnunculus' where 'falco' derives from 'falcis' for 'sickle' because of the shape of the claws and 'tinnunculus' from 'tinnulus' meaning 'shrill'. An archaic name for a Kestrel is a windhover which sums it up perfectly. I have no idea why we went all French.