The largest of the harriers, the Marsh Harrier can be recognised by its long tail and light flight with wings held in a shallow 'V' as it drifts leisurely above the reed beds with steady wing beats between glides. A deadly silent assassin. It is distinguishable from other harriers by its larger size, heavier build, broader wings and absence of white on its rump. They breed in marshland and river valleys, with Norfolk being one of the best places to see them.

A Marsh Harrier is Buzzard sized but less bulky. The male has a light coloured head and tri-coloured wings, which are brown with grey underside patches and distinctive black wing tips. The underside of the tail is also grey. Female Marsh Harriers are almost entirely chocolate-brown, with the top of their head and front of their wings having a yellowish straw colour. 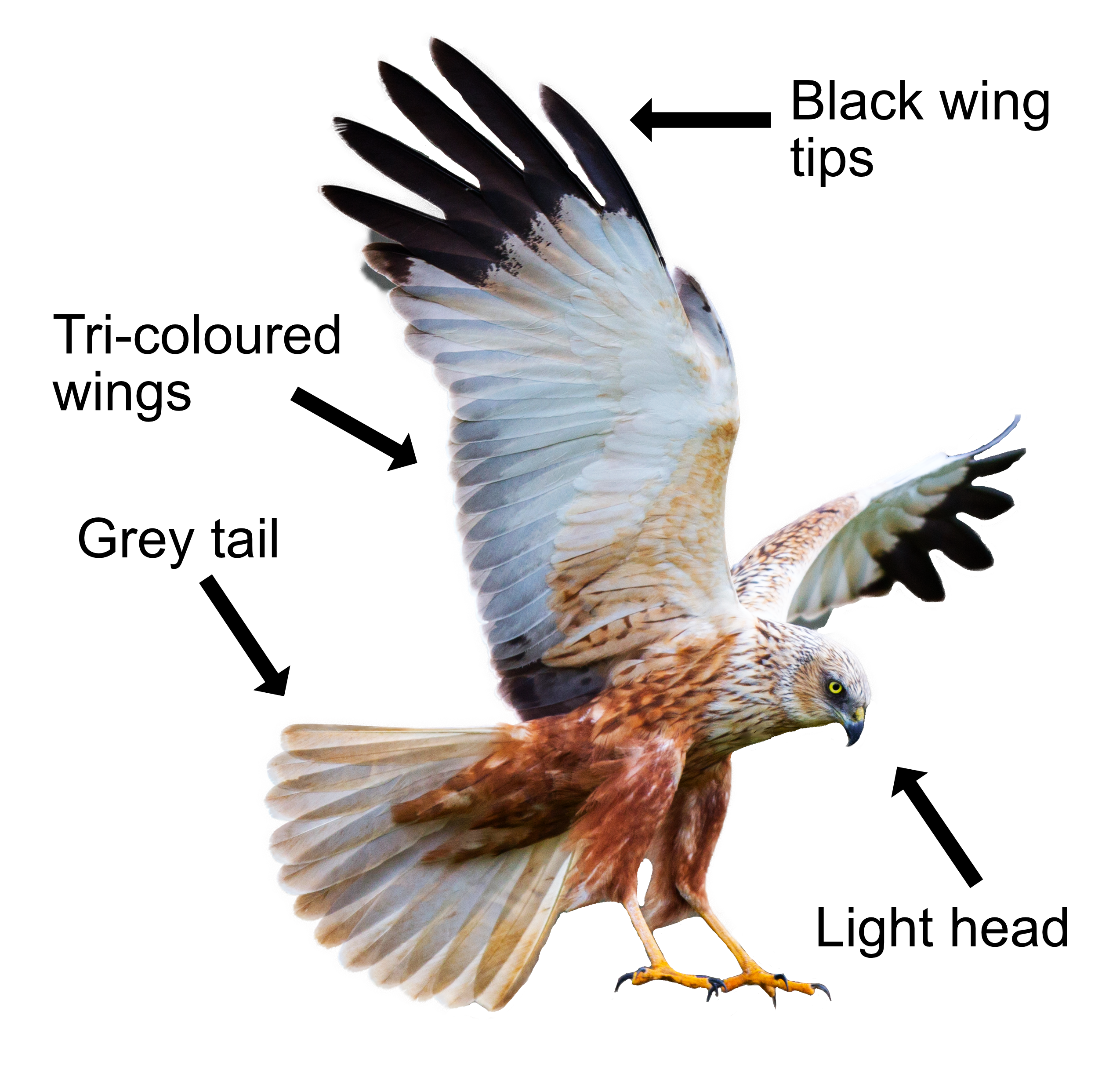 The items on a Marsh Harrier’s menu are many and varied. Everything from amphibians to small mammals (like rabbits) and the chicks of waterbirds (like ducklings) which live on or near marshes and wetland. The female, being larger, can target more substantial meals – including moorhens, water rails and wading birds. The Marsh Harrier’s hunting technique is ‘low and slow’. It quarters the ground like a Barn Owl, floating above the reeds looking and listening intently for movement below, surprise being their key to success. They can turn on a sixpence and drop on to their prey in an instant.

Marsh Harriers nest in reed beds. Before breeding, they do a breathtaking aerial display, including a sky-dance where the male mock attacks the female and passes food which she catches. Pairing usually lasts for a single breeding season, but some will remain together for several years. Marsh Harriers are mostly silent except during courtship when the male has a "kweeoo" call. Nesting starts in April. The female builds a nest from a pile of reeds and sticks on marshy ground while the male constructs 'false' nests nearby to show he could do it if she wanted (like doing the ironing). She lays 3-8 eggs 2-3 days apart, which hatch after 35 days giving an unevenly aged brood. Mum alone incubates the eggs while dad brings her food. Once hatched, dad continues to bring the food while mum feeds the young until they have grown and scattered in the nearby vegetation. The youngsters can fly after 35 days. Mum stays with them for a further three weeks, showing them how to hunt.

The Marsh Harrier is one of the success stories of recent times. In the 1800s, they were abundant in Norfolk and throughout East Anglia. However, they almost became extinct because of habitat loss from the draining of marshes for farmland and from persecution. They were down to one pair by 1971. They are Specially Protected and the restoring of wetlands has helped their recovery. There are now over 400 pairs. Most Marsh Harriers are summer visitors, with few staying over winter, migrating south to Southern Europe and Africa in the autumn.

Their Latin name is 'circus aeruginosis' where 'circus' is derived from the Ancient Greek 'kirkos', referring to a bird of prey's circling flight ('kirkos' means 'circle') and 'aeruginosus' is from the Latin for 'rusty'. A rusty coloured circling bird, which it isn't really.