Swifts are the supersonic fighter jets of the birds. They are scimitar winged, aerial masters. They can cruise at 26 mph, their default speed, but when screaming across the sky they can get competitive and, by radically altering their aerodynamics, can reach speeds of up to 69 mph. This makes them the fastest bird recorded in straight and level flight. Like a supersonic fighter, they can even hold this speed when flying upwards with their afterburners on. Only Peregrine falcons are faster, but they cheat by using gravity to gain speed in a stoop.

A Swift is all sooty brown and looks black from a distance (and you usually see them high up or flashing past). They have a pale throat and stiff, narrow scythe like wings. The tail is forked. Their tiny legs (undercarriage) are forward pointing so they can only hang onto a rough surface and are unable to grasp a perch. You will not see Swifts on wires or branches, only in excitedly screaming squadrons racing across the sky. 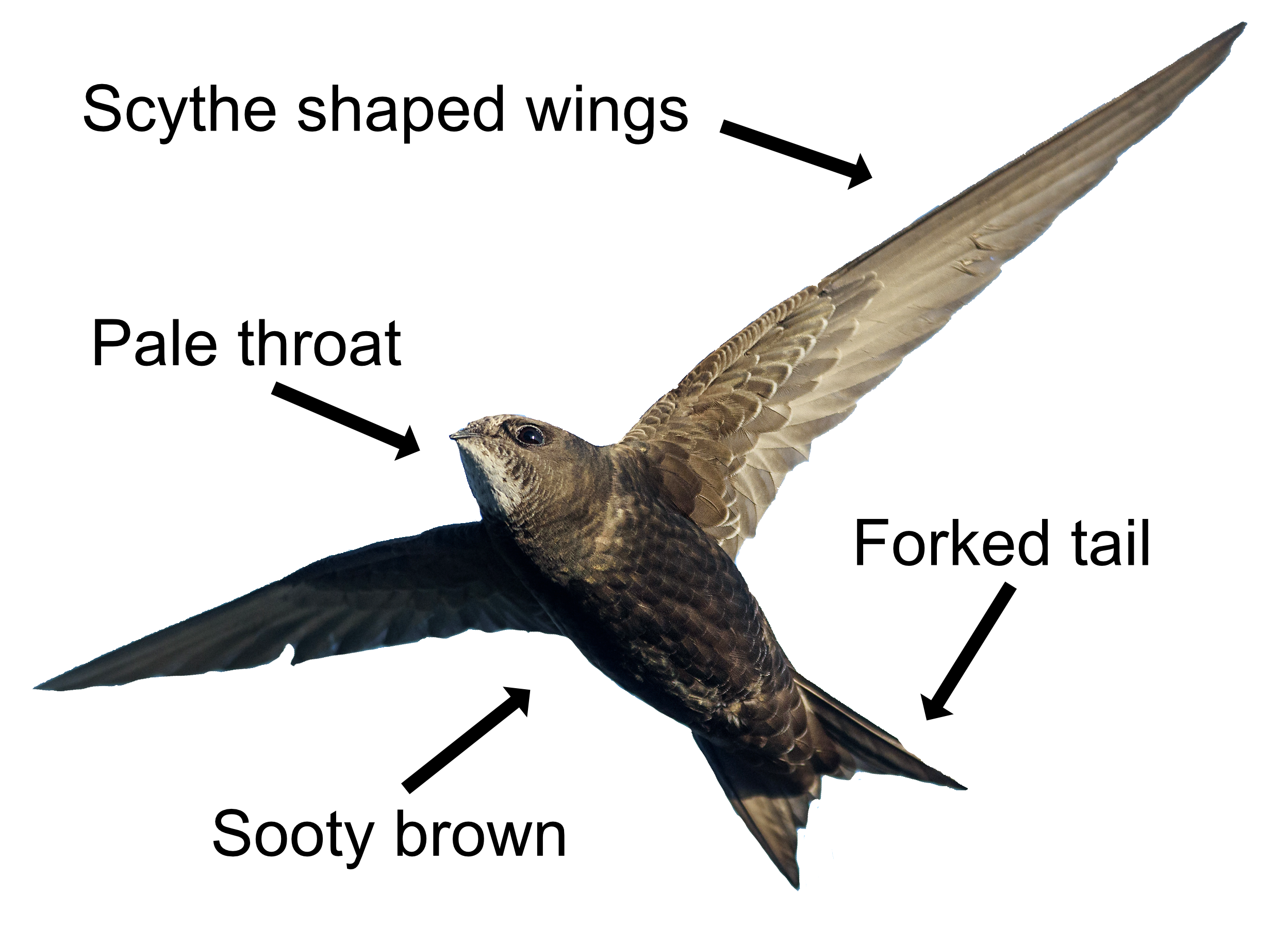 Swifts feed on insects including flying beetles, flies, hover flies, moths, butterflies, flying ants, lacewings, and airborne spiders, catching up to 10,000 a day! When flying around in Central and Southern Africa, Swifts will range widely in search of food and will go out of their way to avoid storms.

Swifts arrive here in early May and are gone again by August. As time is short, they nest soon after arriving. They breed in old buildings with access to the roof space or cracks in cliffs. They make a shallow cup of straw and other material that has been gathered while flying. They lay 2 or 3 eggs which hatch after 19 days. The young can fly 42 days later once they have finished flight school. The young pilots are independent on leaving the nest and immediately migrate back to Africa in their smart uniforms. Incredibly, they will remain airborne for the first 2 years of their flying career before settling down to nesting. Swifts can even sleep while flying! Nobody is quite sure how they do this. Swifts only stop flying when on their nests.

There are 80,000 pairs of Swifts in Britain, but this number is declining through loss of nest sites as modern houses have no access to their roof spaces, like old houses do, and many old houses are being modernised. It is important to fit Swift bricks and boxes on your house to help them. Their Latin name is 'apus apus' which is derived from the Greek 'apous' meaning 'footless', a reference to their small, weak legs. Swifts are often depicted without feet in old paintings, pottery and heraldic shields.