Buzzards, like Red Kites, have also been making a comeback after years of persecution by gamekeepers and the impact of pesticides severely affecting them. They also suffered a sharp decline in the 1950s when large numbers of rabbits, their favourite food, died from myxomatosis. 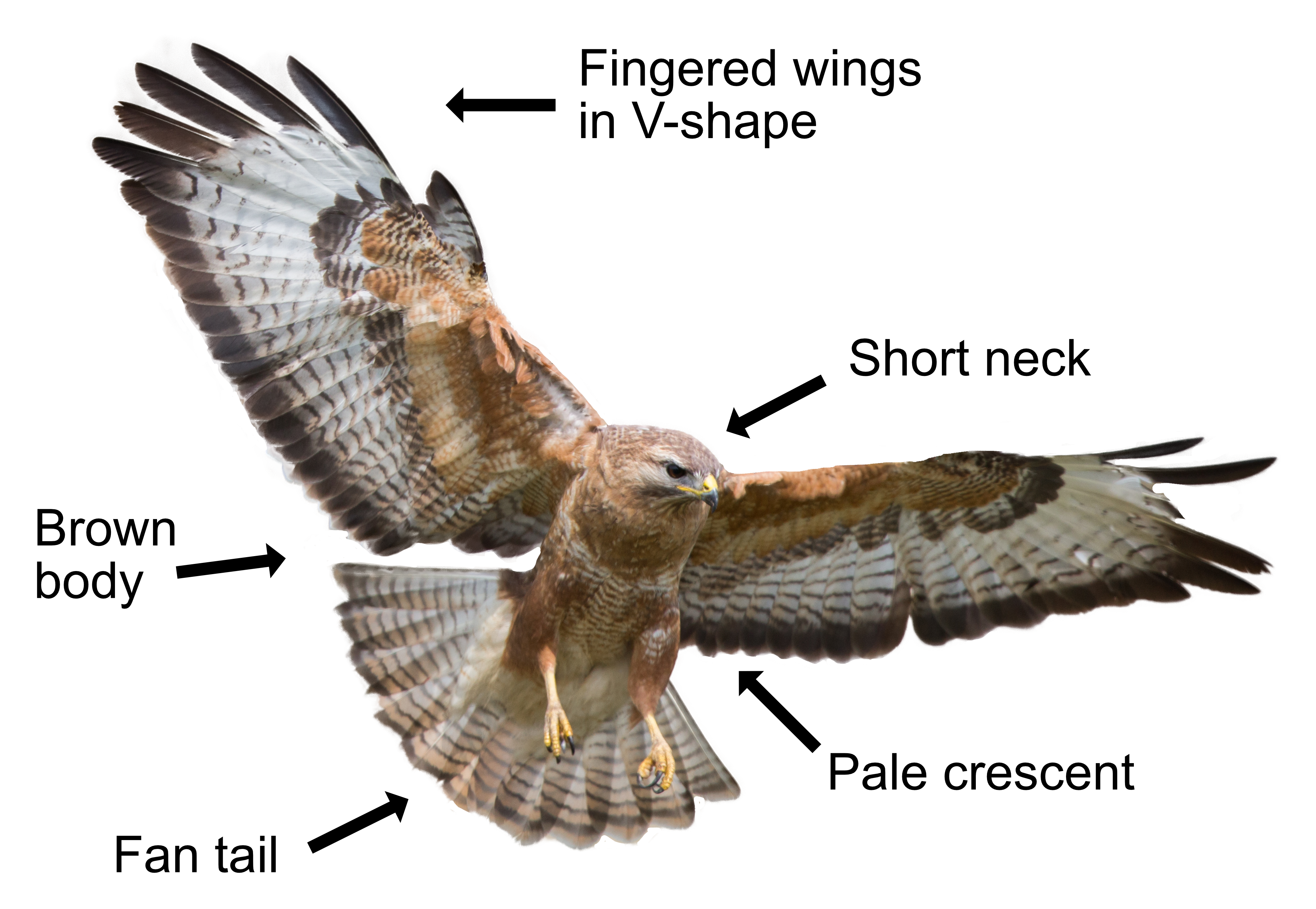 Usually seen singly or in pairs, they are larger than a Carrion Crow and can be a bit variable in plumage but have a couple of giveaway traits. They have a slightly streaky brown back, paler underparts and a hooked beak you don't want to mess with. They often have a giveaway faint, pale crescent on their breast. They are easiest to recognise when flying with their short neck, broad 'fingered' wings held in a characteristic V-shape, and short barred tail that looks like a rounded fan. The wings are pale underneath with a black rear edge. The youngsters are paler and streakier than the adults and the female is slightly larger than the male. As well as soaring and gliding on their wide V-shaped wings, they can hover like a Kestrel using slow wing beats. Although you mainly seen them when flying, Buzzards are a bit lazy and spend a lot of time perched on posts or trees, ready to swoop down on any prey that is silly enough to get too close. Their cat like mewing call "meee-ooo" can be heard all year round and especially on sunny days.

For a Buzzard, if it moves and is not too big, they will eat it. They feed on small mammals (like voles), insects, worms, and carrion (dead animals), but their favourite food is a tasty baby rabbit.

Buzzards build their nests in trees or on crags. The nest is made of sticks lined with bracken and moss. A pair of Buzzards will often re-use the same nest over many years. In April or May, 2 to 4 eggs are laid at 2 day intervals and hatch after 35 days. Mum does the bulk of the egg sitting while dad gets the bunny takeaways. The young are fed in the nest by both parents until they can fly 50 days later. They stay dependent on mum and dad for food for a further 40 days until they have got the hang of skinning rabbits.

The Buzzard is mainly resident and found in cultivated country and wooded upland valleys. The young usually keep within a 50km radius of mum and dad so they can pop home at weekends for a good rabbit stew and a chin wag. There are about 50,000 pairs in Britain. The Latin name is 'buteo buteo' which means 'buzzard buzzard'. Science being highly original with its naming again.