The majestic Red Kite was almost driven to extinction by gamekeepers and farmers, but some hung on in Wales from where they have been re-introduced along with birds brought in from Europe. The law has changed, and it is now illegal to kill them. Since the re-introduction, they have been doing well. They are usually seen singly or in pairs.

The Red Kite is rusty red with dark streaks and a pale head. They have a noticeably forked tail, long narrow wings which are usually held flat (unlike a Buzzard's V-shape) and have pale patches at the end before the black wing tips. On their back, there is a faint diagonal pale stripe across the top of the inner wing. The forked tail, though, is the dead giveaway.

The Red Kite's call is more of a whistle compared to a Buzzard's mewing call. It can almost sound like a builder's wolf whistle, a "peeooo-weooo-weooo". The Buzzard, in contrast, calls a single "meeooo" which is repeated after a brief pause. 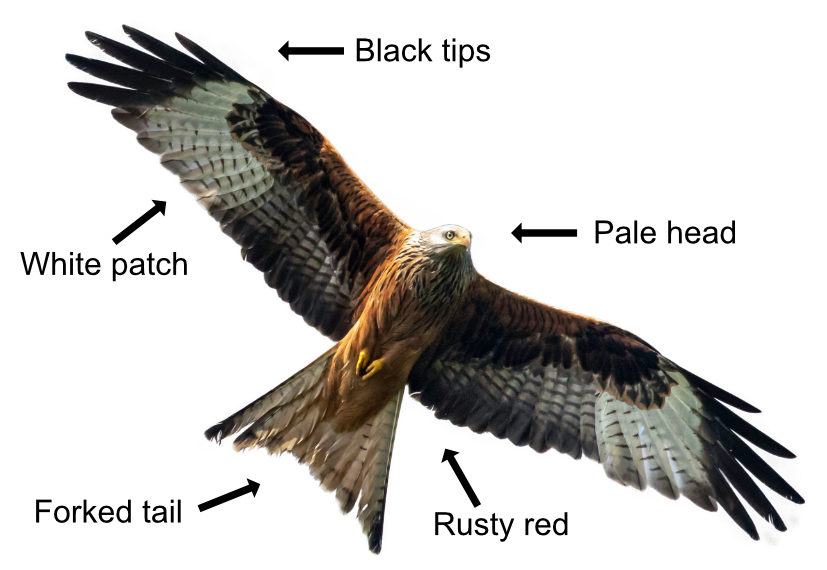 They hunt by circling high overhead until they spot something tasty to eat. Their eyesight, like all raptors, is phenomenally better than ours! They are top predators and have a varied diet, eating both live and dead prey. Their bill is not strong enough to penetrate tough skin, so they cannot take large prey. When hunting live prey, the Kites will dive feet first from the air, or drop from a post, to catch them. Their diet consists of small mammals (like rats, voles, and mice), medium sized birds (like crows and pigeons), earthworms, frogs, and lots of carrion (already dead animals like road-kill, dead sheep and game birds). Scavenging Red Kites were common in medieval London, even being referenced several times in Shakespeare's plays. For many years, gamekeepers and farmers, seeing Kites eating their animals, mistakenly assumed the Kites had attacked them which is why they killed the Kites.

Red Kite nesting starts in late March. They make a large nest of twigs in the fork of a tall tree within a wood or copse. The male brings the twigs while the female neatly arranges them. The female often decorates the nest with rags, plastic bags, and even underwear pinched from washing lines! Ladies are so much better at homemaking than men. A pair of Red Kites may reuse the same well decorated nest for several years. Both birds incubate the eggs, though the female does more than the male. The 1-3 eggs are laid at 3-day intervals and hatch after 31 days (a long time). The youngsters are fed by both parents and can only fly after 50-70 days. They continue to be fed for another 20 days. With child rearing taking such a long time, they can only raise one brood each year.

The 2,500 pairs of Red Kites in Britain are largely resident, though young birds will wander widely in spring to find their own patch. Their Latin name is 'milvus milvus' which means 'red kite red kite'. Not very original for something so magnificent.