The Peregrine’s fortunes have varied. Falconers have used Peregrines for over 3,000 years, beginning with the nomads of central Asia. In the Middle Ages, they were held as a symbol of royalty and nobility, and harsh punishments protected them. Later, when shooting became popular, gamekeepers persecuted them. In the Second World War, they killed Peregrines to protect the homing pigeons carrying secret messages. Then pesticides like DDT affected the calcium in their eggshells, causing them to break before the chicks could hatch. Thankfully, these pesticides are now banned, and the Peregrine is once again protected. Its numbers are steadily recovering and you can regularly see them nesting on top of tall city buildings, cathedrals being a firm favourite, showing off how noble they are. Although they nest on buildings, cliffs and crags, they are a bird of the open countryside.

The Peregrine is crow sized with a dark blue back, finely spotted buff underparts, and sporting a black fighter pilot’s moustache on its white cheeks, giving it a hooded look. It has long, broad-based pointed wings with a relatively short tail. Their underwing is barred, stripy looking. The female is noticeably larger than the male. The Peregrine’s silhouette is quite distinctive, and it flies with swift wing beats followed by long glides. 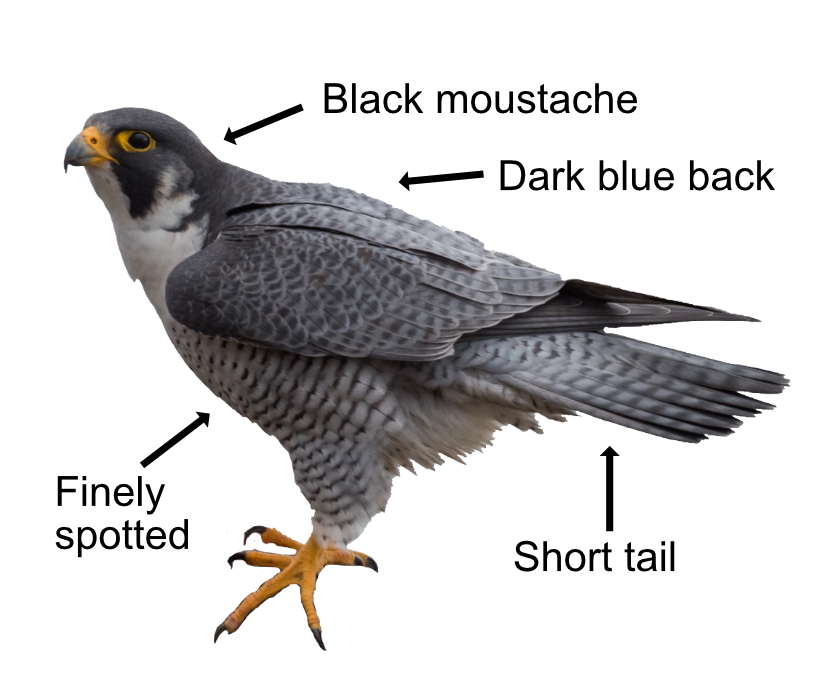 Their favourite food is a nice fat Woodpigeon, though they eat birds of all sizes from Blue Tits to Black-headed Gulls. They pick their prey from a high perch or by circling high in the sky, then shooting down like a Stuka in a fast diving ‘stoop’ to catch it, ripping it apart with their talons or knocking it senseless. In a ‘stoop’ the Peregrine is the fastest bird in the world, reaching speeds of over 200mph! They will even dive on to small mammals like rabbits, eating them in extreme weather conditions when birds are scarce. Its athleticism, eagerness to hunt, and easiness to train has made it a very popular bird with falconers.

Peregrines mate for life. The courtship involves breath-taking aerobatics. The male will drop food for the female to catch in flight. Nothing like a juicy Collared Dove for dinner or a Skylark snack to cement a good relationship. The female chooses the nest site, where she scrapes a shallow hollow in which to lay her eggs. The 3-4 white to buff eggs, with red or brown markings, are laid in March. Mum does most of the incubating. Dad helps during the day and keeps guard at night. The eggs hatch after 29 days. Both parents feed the chicks (‘eyases’) who can fly 45 days later but depend on mum (called a ‘falcon’) and dad (called a ‘tiercel’) for a further 2 months. To breed successfully Peregrines need a large open area with plenty of food to hunt. Mum and dad will vigorously defend their nest against other predators, issuing a warning “keck-keck-keck” alarm call, then killing anything that gets too close. In one recorded instance, a Snowy Owl killed a chick and the larger owl was in turn killed by a stooping, angry Peregrine parent. The message is simple; don’t mess with a Peregrine’s chick.

Away from the nest a Peregrine is solitary. There are 1,700 pairs in Britain, with the strongholds of breeding birds being in the uplands of the north and west and along rocky seacoasts. Northern birds move south in winter and many move into coastal areas where there are plenty of seabirds for Christmas dinner. The oldest ringed Peregrine lived to be 18 years old. Their Latin name is ’falco peregrinus’. Both the English and Latin names mean ‘wandering falcon’. The Latin ’falco’ comes from ’falx’, meaning ‘sickle’, as a falcon’s silhouette is sickle-shaped with their long, pointed wings.