With its natty black bandana, the Osprey is the swashbuckling Zoro of the skies. A Majestic black and white pescatarian that likes nothing better than a good fish supper. They are one of the most widely distributed birds of prey, found in every continent except Antarctica. They return here each Spring after their winter stay in Senegal. Being fish lovers, they live near lakes, large rivers, coastal lagoons and estuaries.

The Osprey looks gull-like high in the sky with its bowed wings. It is slightly longer bodied than a Buzzard and has much longer wings. The Osprey is dark brown above, clean white below with a white head and a thick black stripe through its yellow eye - like a bandana mask. There is a dark patch at the bend in the wings and, in flight, the long wings appear kinked at the elbow. Their tail is barred. Like many birds of prey, the female is slightly larger than the male. Their call is a high-pitched “pieu, pieu pieu” whistle, often made round the nest. 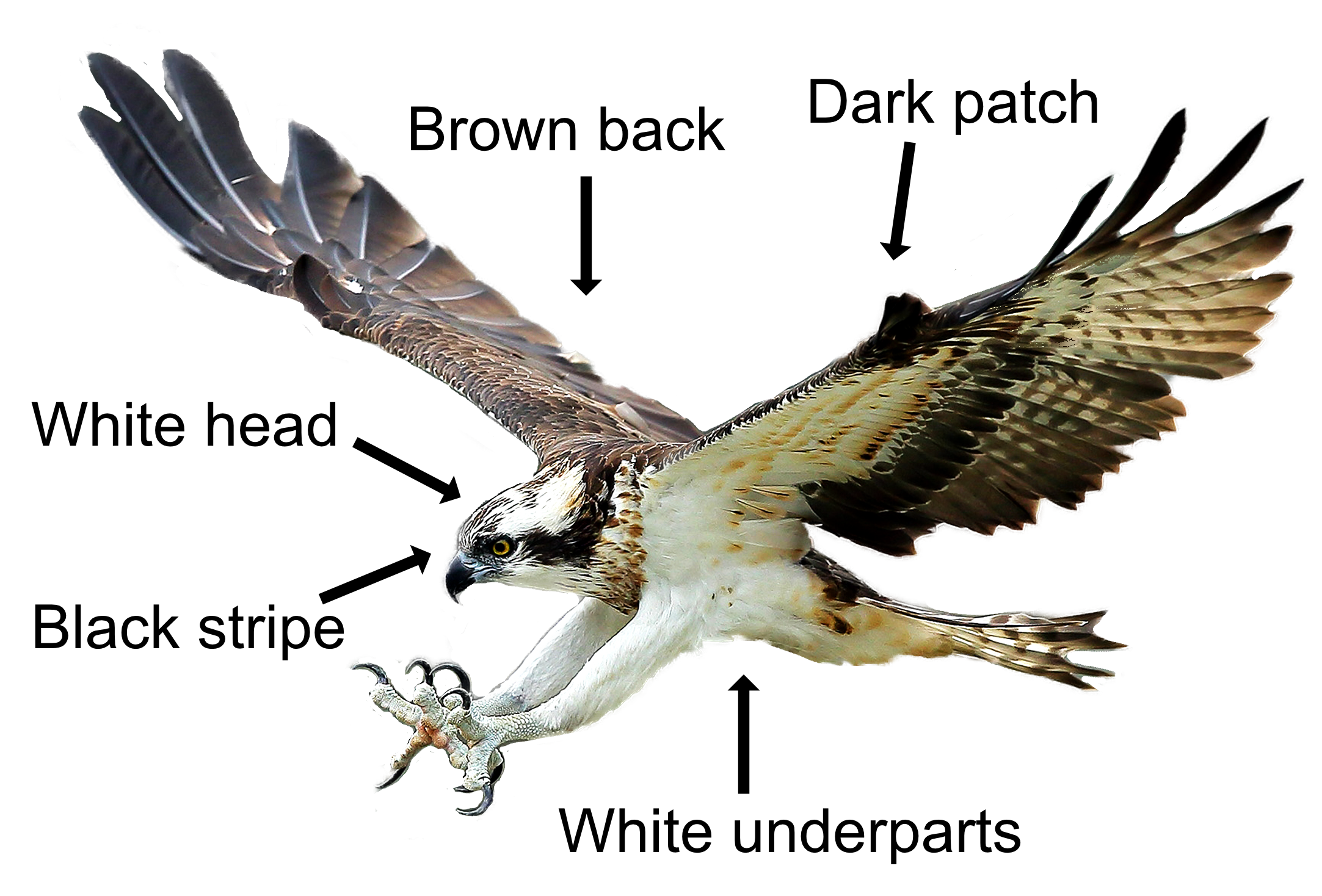 Ospreys and Owls are the only raptors whose outer toe is reversible, allowing them to grasp their prey with two toes in front and two behind, perfect for grabbing fish out of water. They have well adapted nostrils which can be closed and feathers that are waterproof with special spines under their toes to grip their slippery prey. An Osprey can perch for hours on trees or posts before flying off to catch a fish, doing a spectacular feet first dive. Although their main diet is fish and more fish, they will eat small amphibians. There was a medieval belief that fish were so mesmerised by Ospreys that they turned belly-up in surrender!

Ospreys reach sexual maturity and begin breeding around the age of three or four. The male returns first in late March and does an aerial display to impress a female. Once paired, they will usually stay together for life. They build a big nest made of sticks in a tree and will reuse the same nest year after year, adding a few more sticks every year so the nests can get quite big. Two or three eggs are laid in April and the female does most of the incubating. They hatch after 35 days and both parents feed the youngsters who can fly 50 days later. The youngsters depend on mum and dad right up to the beginning of their migration back to Africa in August.

There are 240 Osprey pairs nesting in Britain, and the birds are specially protected. A lot of conservation effort and re-introductions has helped them recover. The biggest threat to Ospreys in Britain is from egg collectors, so many Osprey nests are either kept secret or carefully monitored by volunteer wildlife groups. The oldest European wild Osprey on record lived to be over thirty years of age.

Their Latin name is ’pandion haliaetus’ where ’pandion’ is derived from the mythical Greek king of Athens and grandfather of Theseus, and ’haliaetus’ comes from the Ancient Greek ’haliaetos’ which is ’hali’ for ‘sea’ and ’aetos’ for ‘eagle’. Not surprisingly, the Osprey is also called sea hawk, river hawk, and fish hawk. The origin of the English word ‘Osprey’ is obscure and is thought to be derived from the Medieval Latin ’avis prede’ meaning ‘bird of prey’. In Buddhism, the Osprey is sometimes represented as the ‘King of Birds’ and in Chinese folklore the Osprey is considered to be an icon of fidelity and harmony between husband and wife, due to its highly monogamous habits.