You guessed it, a Pink-footed Goose has pink feet, but so do other geese, so not such a brilliant name after all, though its feet are the brightest pink ones around. Pinked-nose Goose would have been better. The Pink-footed Goose is another goose that overwinters here, arriving in October and leaving in April, and is often seen in large flocks around estuaries and freshwater lakes.

The Pink-footed Goose is smaller than a Greylag Goose. It has a short dark neck, rounded head and a black bill with a pink tip. The overall plumage is a pinkish-brown and pale edges to the dark feathers gives it a barred appearance. There is a white line on the body below the wings and it has pink legs and feet. The short neck and grey forewings are obvious in flight. Overall, it looks more compact than other geese. It is also a much better formation flyer, with skeins ('strings') of geese keeping in a neat V-shape, while making a musical "wink, wink" call to keep together. No-one is quite sure why skeins of geese fly in a V-shape, though the benefits are probably aerodynamic, reducing the effort of flying when not the one at the front. 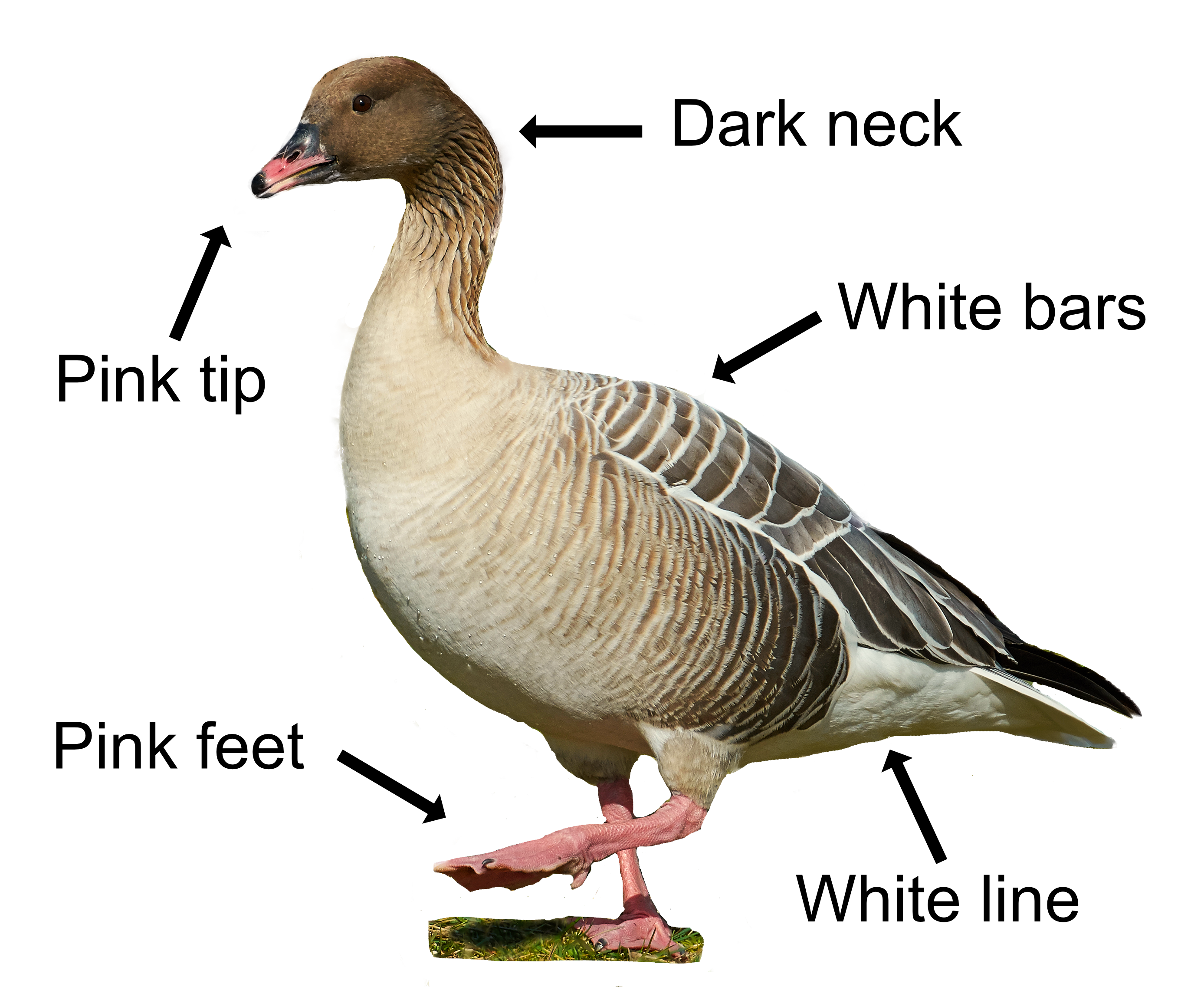 They eat grains, root crops and grass, feeding on farmland during the day before returning to the safety of a lake or estuary at night. Although they graze on farmland, they cause little damage and may even help by gleaning leaves and roots left behind after a crop is harvested, reducing the transmission of diseases.

The Pink-footed Goose pairs for life and breeds in Iceland and Greenland. They nest in inaccessible river gorges where they are safe from ground predators. In May, they lay 3-6 eggs which hatch after 27 days. The goslings accompany their parents on foot to the nearest lake, where they fledge after about 56 days while mum and dad do their moult before flying here. Both mum and dad help look after the youngsters and the family will stay together for their first winter.

About 372,000 individuals spend the winter in Britain, 90% of the world's population of Pink-footed Geese. Numbers have increased in recent years, particularly in Scotland. This might be connected to the increased growing of barley, which they love, and the increased protection from shooting on their wintering grounds. There are two largely discrete populations of Pink-footed Goose. The Greenland and Iceland population which winter in Great Britain, and a smaller Svalbard population which winters in the Netherlands and Denmark. The oldest known bird lived to be 38 years old!

Their Latin name is 'anser brachyrhynchus' where 'anser' is Latin for 'goose' and 'brachyrhynchus' comes from the ancient Greek 'brachus' for 'short' and 'rhunchos' for 'bill'. A goose with a short (pink tipped) bill.