The White-fronted Goose is the most numerous goose in Europe during the winter, but is rarer in Britain. Like many geese, they breed on the Arctic tundra before overwintering here. Two distinct groups arrive in October: Greenland ones come to Scotland and ones Russian come to England, particularly East Anglia. They stay until March and like wet meadows and farmland close to lakes or estuaries.

The White-fronted Goose is smaller than a Greylag Goose and has a grey-brown head, neck and body with a distinctive white forehead (hence its name). There are black bars on the belly and the brown back is crossed with pale lines. Their legs are orange and the bill is a pinky orange. An agile goose whose speciality is a vertical take-off and flying in neat V-formations. They have a squeaky-wheel-like "will-a-wik" call. 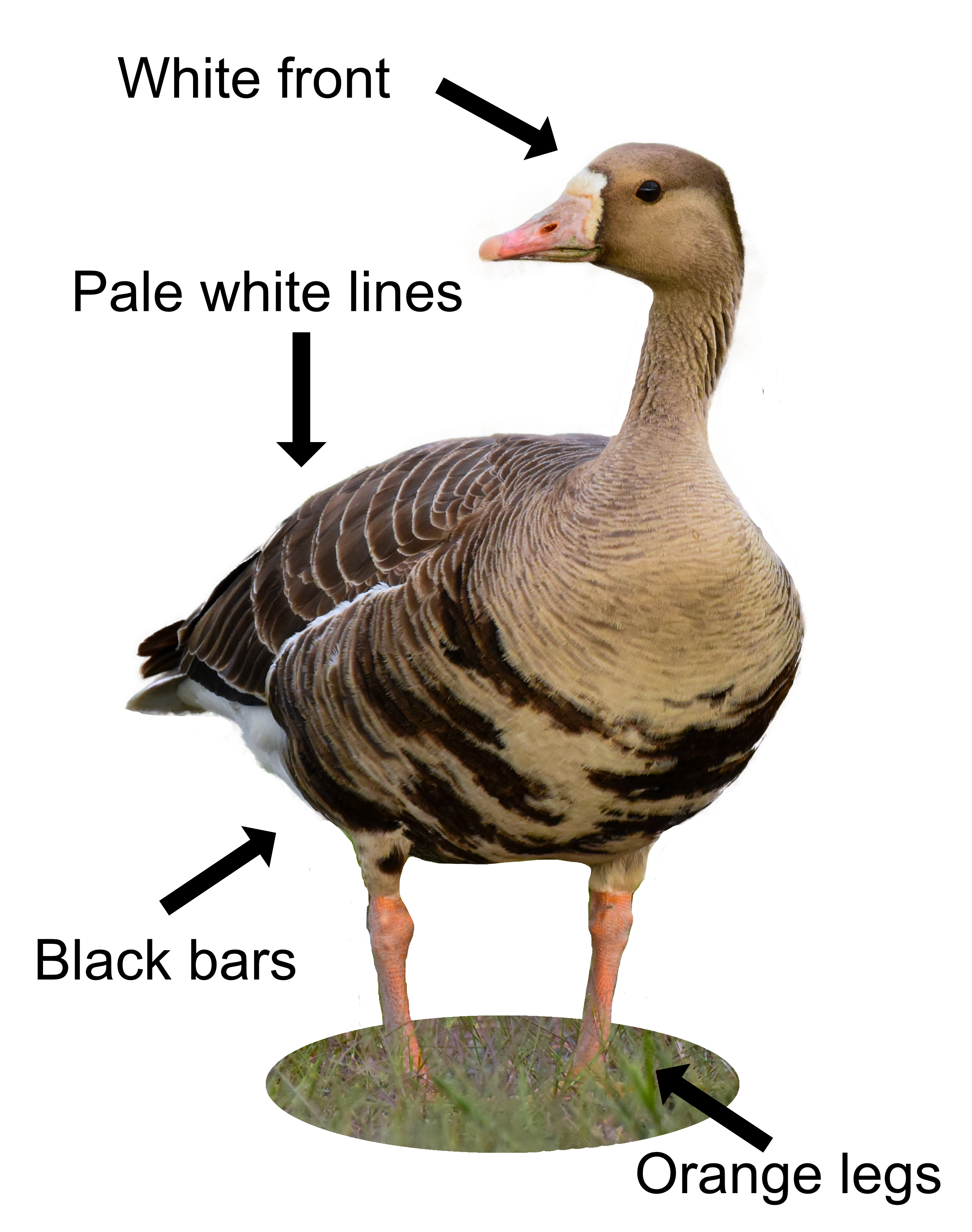 They roost in large flocks that break up into smaller feeding groups during the day to eat grasses, roots, seeds, potatoes, and sugar beet. They are picky about the grasses they like, favourites being couch grass, cotton grass, and horsetail.

At two years old, White-fronted Geese partner up and then stay together for life. They wait for a year while agreeing on domestic arrangements before raising a family. The nest is a shallow affair made of vegetation on the ground and sparsely lined with down and feathers. The 3–7 creamy or pinkish pale buff eggs hatch after 22 to 28 days. Mum does all the sitting while dad proudly stands guard. Both parents defend and feed the newly hatched goslings. Arctic weather conditions are a key factor for the breeding success of White-fronted Geese. There is only about three months to make a nest, incubate the eggs, and raise the youngsters until they are able to fly. While raising the young, the parents do their moult. They moult all their flight feathers simultaneously and they are flightless for 25 days while the youngsters grow. An early onset of the Arctic winter can be deadly for both parents and young when they are all flightless.

About 20,000 White-fronted Geese overwinter in Britain with nearly half of all Greenland Geese coming to Scotland. The drainage of farmland has restricted areas where they can be found. In recent decades, the number of Russian birds wintering in England has fallen sharply, with milder winters allowing birds to remain in the Netherlands rather than crossing the Channel to come here. The oldest known White-fronted Goose lived for 17 years.

Their Latin name is 'anser albifrons' where 'albifrons' comes from the Latin 'albus' for 'white' and 'frons' for 'forehead'. The 'anser' is Latin for 'goose'. The White-fronted Goose is also called a 'specklebelly'.